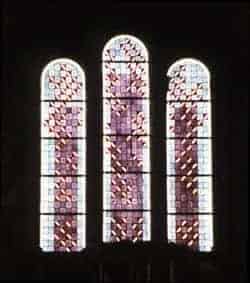 Poensgen’s church stained glass windows are more about the church than the windows.

Contradictory as this may sound, his stated priority is to make windows you can live with, not windows to look at.

Lots of modern religious stained glass windows fight to make a statement and to proclaim the artists’ presence, but Poensgen sees his work as being an integral part of the building rather than an end in themselves.

Having been lucky enough to see the window at Hohnekirche in Soest, I can testify to Poensgen’s success in achieving his aims.

Built in 1220 and decorated with contemporaneous paintings it would’ve been easy to compete, rather than complement the architectural decoration.

By choosing colours from the murals that in turn echo the local sandstone, the windows are appropriately located in place.

This understatement extends to religious iconography; this is the subtlest crucifix I’ve ever seen! 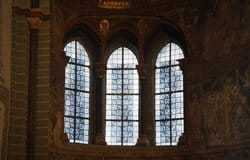 In its own late 20thC way, Poensgen’s work reflects the patterned detail of the early 13thC architectural decoration, proving that modern christian glasswork doesn’t always have to be accompanied by a modern ego!

If you’d like to find out more about Jochem Poensgen, he has his own website, which details his windows project by project.

It looks a bit grey, with long lists of commissions, but if you persevere you can find photos of the churches and windows, which helps contextualise his work.